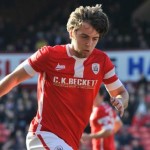 It has been reported that Manchester United midfielder Ben Pearson is enjoying his loan with Barnsley.

The on-loan youngster believes he has handled the step up from Reserves-level football with the Reds.

“I’m loving it,” he told MUTV. “I’ve extended the loan twice and all the lads have been great. I’ve been playing every game and playing well, kicking on, which is good experience. There is such a difference and I think it’s the next step in my career. I needed to do it.

“I saw a lot of Under-21 action in the last 18 months or so and this was the next step. There is a massive fanbase here and what a club to come to. It was underachieving when I first came but we’ve kicked on since then.”