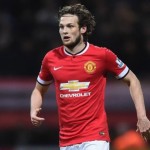 The Dutch international says he is enjoying life under the van Gaal’s management and has praised the 63-year-old’s style of management.

“I really admire that he’s always himself,” Blind told Inside United magazine.

“He’s always really honest to everyone about his ideas and what he wants.

“I think that’s a good thing in a person because you know where you stand as a player.

“That’s what I really admire about him.” I Will Rest When I Retire! – Patrice Evra