It has been revealed that Manchester United midfielder Marouane Fellaini is expected to avoid FA action over claims he spat at Manchester City striker Sergio Aguero yesterday. 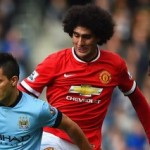 The Belgium international stooped angrily to place his head next to Aguero’s face, as he lay on the ground, and seemingly launching accusations of gamesmanship at the player, whom he had just fouled in the area with a kick to the back of the foot. The FA may examine the footage but it is unlikely to take action against Fellaini.

“I have heard that it is a question on social media,” United manager Louis van Gaal said.

“But already the TV has shown that he is shouting and sometimes when you shout there’s a little bit of – what do you call? – saliva [that comes out] with it. I don’t think that he’s a spitting figure.”

To the question of whether Aguero had mentioned the incident he replied: “Maybe.” John O’Shea On The Verge Of Joining Sunderland