It has been reported that Manchester United boss Louis van Gaal has confirmed Michael Carrick has been ruled out of the Champions League game against Wolfsburg and Antonio Valencia and Ander Herrera are doubts. 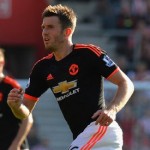 The Dutchman confirmed Carrick will miss the game, saying: “[He] shall not play tomorrow.”

Regarding Herrera and Valencia the Dutchman added: “They have minor injuries and I don’t want to take any risks. We will have to wait and see.

“I don’t want to take risks like we have done with Wayne Rooney because we have to play a full season and it’s better to withdraw players for one match than for them to play and get injured.”

Marcus Rojo, who has sat out the last two games with a hamstring problem, was also missing from the training session. Man Utd Yet To Open Contract Talks With Smalling, Jones