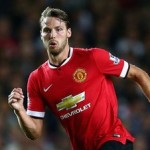 Reports are out claiming that Manchester United midfielder Nick Powell has ended his loan with Leicester City.

The 20-year-old had joined City on deadline day on a season-long loan but has struggled to make his mark on the first team, making just three appearances.

Reports have suggested that City boss Nigel Pearson was unhappy with Powell’s attitude in training and general time-keeping since joining in September.

United have now exercised their option to recall Powell with immediate effect with Neil Lennon said to be interested in taking him on loan at Bolton.

Arsenal Captain Arteta Delighted With The Return Of Tomas Rosicky