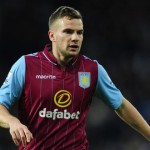 It has been reported that Manchester United midfielder Tom Cleverley won’t rush into a permanent deal with Aston Villa.

The Daily Mail reported that Villa may have to wait until the summer to sign Cleverley on a permanent basis.

As part of his loan agreement from Manchester United, Villa can buy Cleverley for £7.5million this window but he is thought to want to keep his options open for when he becomes a free agent.

Everton tried to hijack Villa’s move last summer and Roberto Martinez is believed to retain an interest. Other clubs are likely to look at bringing in a player with 13 England caps for nothing.

Paul Lambert has expressed a desire to activate the clause in Cleverley’s deal this month to get the midfielder fully on board but the sum of money may also prove a stumbling block.