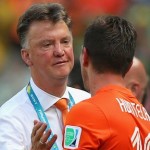 Reports are out claiming that Manchester United are planning a move for Ajax prospect Timothy Fosu Mensah.

The 16 year-old defensive talent is considering his options and could quit Ajax’s academy setup to join United.

Mensah can play at centre-half and right-back.

The chance to work with Holland coach Louis van Gaal is proving a big lure for Mensah, who shone during the Aegon Future Cup for Ajax in April.

Villarreal To Offer Giuseppe Rossi Back To Manchester United