It has been reported that Manchester United are determined to boost Louis van Gaal’s attacking options in 2016. 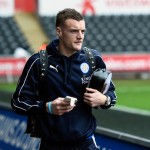 But the player at the top of United’s wish list, with manager Louis van Gaal urging another spending spree to challenge for the Champions League next season, is Kane.