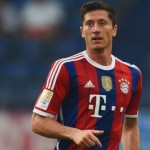 Reports are out claiming that Manchester United are monitoring Robert Lewandowski’s situation at Bayern Munich.

The Poland international’s summer move from Borussia Dortmund has turned sour as he struggles to fit into Pep Guardiola’s playing system.

The Mail on Sunday says it seems certain United won’t exercise their option to sign Radamel Falcao on a permanent basis and Lewandowski would be in ideal addition to bolster their front line especially if he comes on the market around the £30 million bracket.

United boss Louis van Gaal is a fan of the centre-forward.