It has been reported that Manchester United have made a move for Inter Milan midfielder Mateo Kovacic. 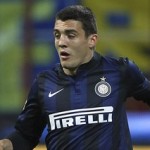 Corriere dello Sport reported that the Premier League giants have made an enquiry for Kovacic rebuffed by Inter.

Inter outbid United for Kovacic 18 months ago, but has become unsettled after failing to nail down a regular start last season.

United are expected to try again for the 20 year-old later in the summer.