It has been revealed that Bayer Leverkusen striker Javier Hernandez says his original move to Manchester United left him tears. 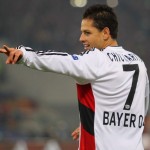 According to the Daily Express, Hernandez broke down in tears when discussing his move from Chivas Guadalajara to Manchester United.

Chicharito played for the Mexican side for four years before moving to Old Trafford, where he helped the team to the Premier League title and the Champions League final in his first season.

However, he admitted that making the move was tough for him.

“It was a very difficult day,” Hernandez said. “It was not easy.”