It has been reported that Manchester United face having to spend £160 million to sign Real Madrid star Cristiano Ronaldo. 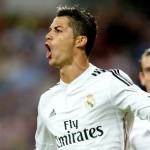 The Daily Star reported that the Old Trafford outfit have set their sights on luring the Real Madrid Portugal and superstar back to the club to help them restore former glories.

It is understood Real president Florentino Perez will look to cash in on the World Player of the Year next summer – if he can find someone to buy him.

It means United have been left with a clear run to re-sign their former No.7 after major rivals, including Paris Saint Germain, Chelsea and Manchester City, decided against paying the fee and wages involved.