It has been reported that Manchester United are backing Manchester City to knock AS Roma out of the Champions League this week. 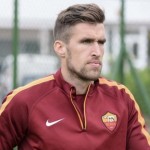 The Sunday Mirror claims that United’s hopes of prising Kevin Strootman away from Roma next month hinge on City knocking the Italian club out of the Champions League.

United boss Louis van Gaal does not want to wait until the end of the season to land the aggressive Dutch midfielder.

And he believes that Roma will slash their inflated £60million valuation on Strootman if City send the Italians crashing out of Europe’s top competition on Wednesday night.

United don’t want to pay more than £30million for a player who is stepping up his recovery from a cruciate ligament injury that kept him out of the World Cup and forced United to put their bid for him on ice.