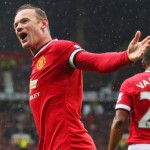 It has been reported that Manchester United have immediately turned their attentions to this weekend’s clash with Chelsea.

The Red Devils hammered derby rivals Manchester City 4-2 on Sunday and with their renewed confidence, will now prepare to meet Premier League leaders the Blues at Stamford Bridge on Saturday.

United captain Wayne Rooney has quickly moved on from the weekend’s stunning derby triumph and insists he and his teammates are well-prepared to take on the champions-elect on their home turf.

“It is a big test for us, Chelsea are top of the league. We will work and prepare on the training pitch and we’ll be ready for the game.”

He added: “Chelsea are in a very commanding position so we have to just trying to win our games.

“I think we are playing nice football, we are winning games and we have to continue that to the end of the season, finish as high up as we can, and then hopefully take form into next season.”