It has been reported that AC Milan attacker Jeremy Menez has again discussed the time when he turned down Manchester United. 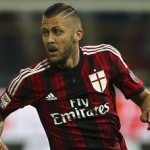 The 27-year-old moved to the San Siro in the summer after an unsuccessful spell with PSG and he admits things could have been very different.

He told L’Equipe: “I refused the offer to join Alex Ferguson at Manchester United because I felt it was too soon and because I wanted to start with my first club.

“All this has been carefully considered. At twenty-seven years, I still have to win titles and I want to show my potential. This has not been the case.” AC Milan On The Verge Of Signing Seydou Keita