Reports are out claiming that Manchester United have opened talks with Benfica for Nicolas Gaitan. 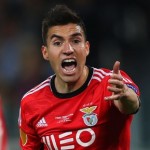 The Daily Star says reports in Portugal claim United officials are deep in discussion with the Benfica management, but any deal is subject to approval from Louis Van Gaal.

If there was to be an agreement it is thought United are prepared to send Bebe the other way as part of the deal after he impressed on loan for Pacos Ferreira last season.

United are keen to offload Bebe, but his wage demands could be a problem for the Lisbon club who are struggling finically.