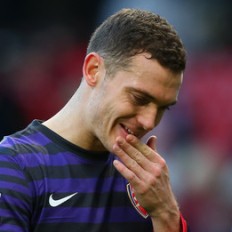 After the sale of RvP to Utd Arsenal fans would not find this news unbelievable, however unlike the RvP saga, Arsenal would actually be willing sellers after settling on Koscielny and Mertesacker as first-choice centre-backs.

Thomas Vermaelen is facing a make-or-break summer in his Arsenal career.

Gunners manager Arsene Wenger could be ready to listen to offers for his out-of-favour captain, as he looks to shake up his squad.

That has alerted several top clubs, including Manchester United, who are watching developments closely.

Unlike last year, when they reluctantly allowed Robin van Persie to move to their their rivals from Old Trafford, Arsenal would be willing sellers this time.

Barcelona are also keeping tabs on the situation.

Vermaelen is understood to be keen to stay and fight for his place at Arsenal, even though he is no longer a guaranteed starter.

The Belgium international has been edged out of the starting line-up, with Laurent Koscielny and Per Mertesacker becoming Wenger’s first-choice centre-back pairing.

Their partnership went from strength to strength on the run-in, after Vermaelen was ruthlessly axed following a March defeat at Tottenham which left the Gunners seven points behind their North London neighbours in the race for Champions league qualification.

Frenchman Koscielny enjoyed a great run of form and built a good understanding with Mertesacker as Arsenal won eight out of their last 10 games to clinch fourth place on the final day.