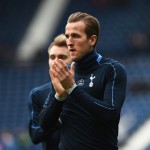 Reports are out claiming that Manchester United are preparing a massive bid for Tottenham striker Harry Kane.

But even that huge fee for the England centre forward, 22, might not be enough to persuade Spurs chairman Daniel Levy to do business.

United watched Kane again last Sunday against Chelsea and their dossier on him includes detailed computer analysis of his all-round game and character.