It has been revealed that Manchester United are eyeing a double raid on Southampton in January. 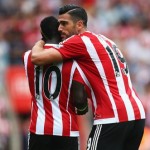 The Telegraph says United are set to swoop for Southampton stars Sadio Mane and Graziano Pelle.

Louis van Gaal will make an improved bid for Mane and has added Pelle to his wish-list after an impressive start to the season.

Van Gaal will be looking to add depth and quality to his squad as United look to win the Premier League for the first time since Sir Alex Ferguson’s retirement.