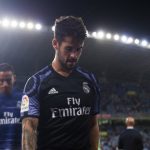 It has been revealed that Manchester United are plotting a winter move for Real Madrid’s Isco, according to reports.

The Daily Mirror claims that United see the midfielder as a ‘viable target’ in January as Jose Mourinho continues to rebuild the squad he inherited from Louis van Gaal.

Isco, 24, is out of favour under Zinedine Zidane at the Santiago Bernabeu and was reportedly close to leaving Madrid for former club Malaga recently but a del never came to fruition.

It is understood that Mourinho could offer him a pathway out of Madrid when the winter market opens as United feel he is a target who could be attainable given he has only appeared three times for Real this season.

United reportedly want an available and affordable creative midfielder and it is suggested that Isco fits the bill.