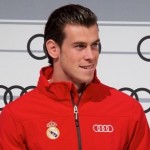 It has been reported that Manchester United are planning a WORLD RECORD bid for Real Madrid star Gareth Bale.

Le 10 Sport claims that United are lining up a bid for the Welshman who, it is reported, is not essential to Real Madrid long-term.

United attempted to sign the 25-year-old before he left Tottenham 12 months ago but the attacker instead chose Madrid.

But they’re ready to try again with stunning bid worth £88million.