It has been reported that Manchester United have denied claims that they are set to make a huge offer for Harry Kane. 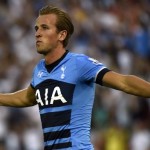 It was reported on Thursday that the Red Devils were preparing a lucrative last-ditch proposal in a bid to lure the 22-year-old striker from Tottenham.

However, a source has told The Express that the club has no plans to sign the England international before the Premier League season kicks off this Saturday.

“United say suggestions they’ve made a massive bid for Kane is nonsense,” said the source.

Kane, who netted 21 league goals for Spurs last term, will be in action at Old Trafford on Saturday when the North London club coincidentally take on United in the 2015/16 season opener.