It has been reported that Manchester United are drawing up sensational plans to bring Real Madrid superstar Cristiano Ronaldo back to Old Trafford. 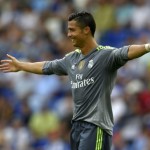 The Mirror claims that United are willing to match Ronaldo’s £15million-a-year wages to bring him back to Old Trafford – because they’ll get the cash back in shirt sales.

Real are understood to value their ace at £90m, although sources close to Ronaldo reportedly claim that figure could drop to £70m for a player that is soon to turn 31.

But regardless of his age United will meet the forward’s contract demands if they are allowed to negotiate terms.

That is because it is thought the commercial revenue Ronaldo could generate from the transfer would greatly outstrip United’s outlay on fees and wages.