Sensational news are out claiming that Manchester United are believed to be considering a £40million summer bid for Bayern Munich’s Toni Kroos. 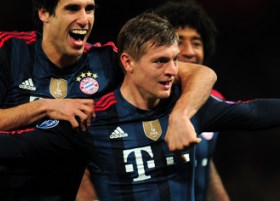 The Daily Mirror reported that the Red Devils are determined to lure the 24-year old German midfielder to Old Trafford at the end of the season.

Kroos, who is contracted to Bayern until June 2015, is badly wanted by United boss David Moyes who could try to tempt him with an offer that, if accepted, would become a club-record transfer fee for the Old Trafford outfit.

Bayern could quite possibly ponder a massive proposal especially as Kroos would be free to leave for nothing in the summer of 2015.