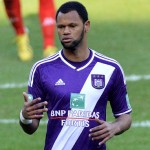 It has been reported that Manchester United are being linked with a surprise move for Anderlecht defender Rolando.

The Daily Express claims that Louis van Gaal is on the lookout for a new centre-back in the summer and the United boss is attracted by the Portugal international’s availability.

Rolando was sent on loan to Belgian outfit Anderlecht in February until the end of the season after falling out of favour at Porto.

And the 29-year-old would be available at a knockdown price in the summer with his contract set to expire next year.