It has been reported that Manchester United are still pondering a winter move for former captain Nemanja Vidic. 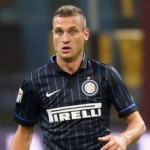 The former Serbian international centre-back left Old Trafford for Inter Milan when his contract expired at the end of last season but could make a shock return to England in January.

Multiple reports suggest that United have been given the all-clear to re-sign 33-year old Vidic when the next transfer window opens in what would be a major coup to Louis van Gaal’s ailing defence.

The 33 year old has made nine Serie A appearances for the Nerazzurri this season but has failed to impress at the San Siro after a stellar career in Manchester.