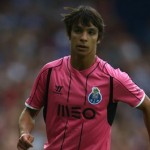 It has been reported that Manchester United had scouts in the stands for Porto’s clash with Penafiel on the weekend.

Record claims that United representatives were joined by Utrecht, Montpellier and Lille scouts for the game.

Porto won the clash 3-1 thanks to goals from Hector Herrera, Jackson Martinez and Oliver Torres.

Torres, on-loan from Atletico Madrid, has been a long-term target for United, where he is good friends with David de Gea and Ander Herrera.