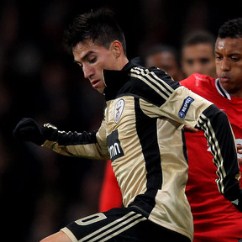 Interesting news are out and it has been revealed that Manchester United boss Sir Alex Ferguson is ready to test Benfica’s resolve with a bid for Nicolas Gaitan.

Diario Ole revealed that Ferguson will make a £25m bid for midfielder Gaitan.

Gaitan, 23, can play on either flank but is equally adept in the hole behind the striker, and has shown a creative spark that has caught the eye of managers across Europe.

Until now, however, it is only United who have shown a concrete interest in the player.