Reports have emerged claiming that Manchester United may grant FREE transfers to Javier Hernandez and Anderson. 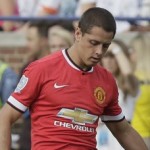 It is said that the Premier League giants are struggling to find buyers for their fringe players due to their big wages.

The Mail on Sunday says United are still paying the bulk of Nani’s £94,000-a-week wages at Sporting CP after his loan move last week.

Chicharito and Anderson are both up for grabs, but their wages are both in excess of £80,000-a-week, which means they are hard to sell and could even be offloaded on free deals with compromise agreements on their salaries.