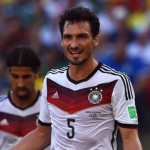 Reports are out claiming that Manchester United are pushing to close a deal for Borussia Dortmund defender Mats Hummels.

The Mail on Sunday reported that the Premier League giants will this week attempt to complete the signing of German defender Hummels.

However United will have to up their original offer of £17m to nearly £25m if they are to force German club Borussia Dortmund to sell.