Reports are out claiming that Manchester United are set to swoop on FC Porto ace Danilo this summer. 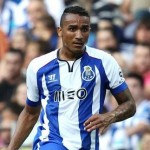 The Express reports that the Red Devils are ready to meet the Brazilian full-back’s release clause of £37million.

Danilo is one of the most highly-rated right-backs in Europe right now and has already attracted interest from the likes of Liverpool, Manchester City, Real Madrid, Barcelona and Bayern Munich.

It appears as though Danilo will leave Porto at the end of the season but where he ends up remains to be seen.