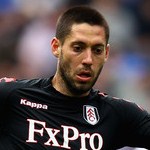 The USA international star has just over a year on his contract and is coy over the prospect of signing new terms.

Arsenal boss Arsene Wenger is chasing the free-scoring midfielder and the Guardian revealed that the Premier League champions are also weighing up a £10 million offer for the 29 year-old. Arsenal In Advanced Talks With Borussia Dortmund For Sokratis Papastathopoulos