Reports are out claiming that Manchester United are prepared to sell Patrice Evra to Juventus this summer. 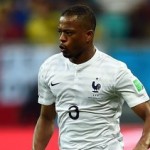 Tuttosport claims that talks between the clubs have intensified this week, with United prepared to sell the Frenchman for €4 million.

United boss Louis van Gaal would prefer to keep Evra, who penned a new one-year deal before the World Cup, but will agree to the sale if Juve meet their asking price.

The Serie A champs, however, refused to go higher than €3 million for the 32 year-old.

Juve have also tabled a two-year contract to Evra’s representatives worth €7 million.