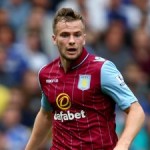 Reports are out claiming that Manchester United are keen to do business with Aston Villa in January over Tom Cleverley.

The Express & Star revealed that United want to sell midfielder Cleverley for £4million in January to loan club Aston Villa, who have an option to buy.

The Red Devils could lose the 25-year-old on a free transfer if Cleverley does not commit to a permanent Villa deal in January.