It has been reported that Manchester United are willing to release three senior players away on-loan. 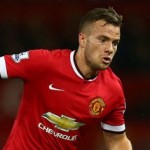 The Mirror reported that United will let Danny Welbeck, Tom Cleverley and Wilfried Zaha go ON LOAN in a shock move by Louis van Gaal.

The Dutchman has assessed the young English trio and decided he wants them to go out for regular Premier League football before deciding whether he wants to use them long-term.

News of the decision flashed round the Premier League grapevine yesterday as interested clubs formed a queue for striker Welbeck, midfielder Cleverley and winger Zaha.