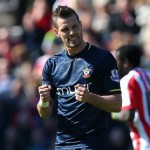 It has been reported that Manchester United are believed to be closing in on a deal for Morgan Schneiderlin.

The Daily Mail reports that the Red Devils have emerged as favourites to sign the Southampton midfielder.

The French international has long been linked with Arsenal and Tottenham but it is believed that United are now firmly in the race as they get set to prepare a bid for the £25million-rated midfielder.

Louis van Gaal is reportedly looking for a top-quality central midfielder to take over from the ageing Michael Carrick and it is widely suggested that he is very keen on Schneiderlin who is almost certain to leave St Mary’s this summer.