Reports are out claiming that Manchester United are being linked with a bumper bid for Bayern Munich star Arjen Robben. 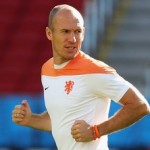 The former Chelsea and Real Madrid star was Van Gaal’s first purchase when he took over at Bayern Munich and the manager is now reportedly planning to repeat the trick at United.

A £40 million offer is being prepared, but Robben will take some convincing.

“And I cannot imagine that Bayern would want to sell me.

“I have only just renewed my contract and we are happy with each other. It would have been a different story had I been unhappy.

“I would have been open to a move then, because I had a great time under Van Gaal at Bayern. He has been very important for my career.

“However, the fact is that I am very happy at my current club.”