It has been reported that Manchester United are ready to make a move for Tottenham striker Harry Kane. 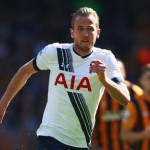 The Manchester Evening News reports that United executive vice-chairman Ed Woodward is set to test the resolve of Spurs chairman Daniel Levy by lodging a £50million bid for the 21-year old.

United have already been linked with Kane, who enjoyed a breakout season last by scoring 31 goals in all competitions, but it is being suggested that the Red Devils are now ready to move for his services.

Levy is known as a ferocious negotiator and is unlikely to allow Kane to leave White Hart Lane this summer but nonetheless, Woodward plans to make his presence felt with a big-money offer.