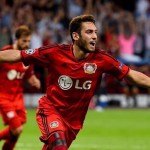 The 21 year-old Turkey international is this season emerging among the brightest young talents in Europe thanks to his exploits in the Champions League.

United have already failed with a bid for Calhanoglu, having slapped in an offer in the final days of the summer market.

Their interest has not waned. Indeed, given his form this season, United are making the Turk a priority target.

Along with United, Calhanoglu is also aware of Barcelona’s interest and stated last week: “Barcelona and Manchester United are huge clubs and it would be difficult to turn them down.

“But I have not said anything about any transfers or anything of the sort.”

Hakan Calhanoglu is also a target for another Premier League club Arsenal.