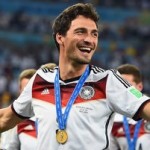 Reports are out claiming that Manchester United are waiting for the green light to bid for Borussia Dortmund defender Mats Hummels.

The Daily Star reported that United officials have already put feelers out to Hummels’ camp to determine if the Germany defender would be keen to move to Old Trafford from Borussia Dortmund.

They hope the World Cup winner will make a decision on his future now he has returned from Brazil and if there is mutual interest they will put in an offer of £20m.


AS Roma To Beat Arsenal, Man Utd For Juan Cuadrado