It has been reported that Manchester United remain in the hunt for Valencia defender Nicolas Otamendi. 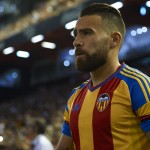 According to reports from Fichajes.com, United could still offer as much as £35million for the centre-half.

With £44million at his disposal after the sale of Angel Di Maria, Louis van Gaal is keen to strengthen his backline, as United look to challenge both domestically and in Europe this season.

Valencia want to keep hold of their man, but would be tempted by a bid so large.