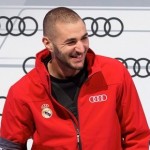 After learning that Real coach Carlo Ancelotti would be willing to part with the Frenchman next year, Spanish sources say Van Gaal reached out to the Italian earlier this week about the situation.

Benzema only penned a new deal with Real earlier this season and has impressed.

But with Jese Rodriguez returning to full fitness and Real eyeing Bayern Munich striker Thomas Muller, Benzema could be squeezed out in 2015.

Along with United, Arsenal and Liverpool are also interested in the France international.