Reports have emerged claiming that Manchester United are being linked with AC Milan defender Adil Rami. 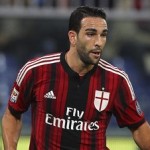 Tuttomercatoweb reported that Milan will offload Rami in January, with United a possible destination for the 28-year-old.

The French international has been at Milan since January, initially on loan before completing a permanent switch over the summer.

However, boss Filippo Inzaghi is said to be looking to cash in on the defender after he slipped out of his first-team plans. Massimiliano Allegri Lined Up As Next Man Utd Manager