It has been revealed that Manchester United boss David Moyes is considering a shock January move for Barcelona midfielder Andres Iniesta. 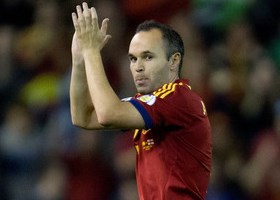 The Daily Mail claims that Moyes is carefully monitoring events in Barcelona and could follow up his interest with a bid in the January window, if he feels there is a genuine chance of pulling off a transfer that would rank as one of the most audacious the Barclays Premier League has known.

There are increasing noises in Spain that all is not well between the little maestro and his Nou Camp bosses and that, for the first time in his career, he may be contemplating joining a new club, rather than signing a new contract.