Reports are out claiming that Manchester United are being linked with a fresh move for Athletic Bilbao midfielder Ander Herrera. 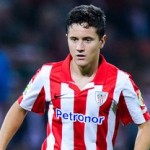 The offer from United is unusual due to the fact that Herrera’s current contract contains a £30m release clause, which will increase to £35m at the end of this month.

It is extremely unlikely that Bilbao will accept United’s first offer for Herrera, who has two years remaining on his current deal.