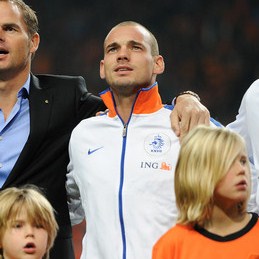 The Daily Mail reported that the Dutch international came close to moving to Old Trafford in the summer, but Fergie was warned off by the size of the figures involved in the deal.

However, Ferguson could be forced to dip into the transfer market this January after the club suffered injuries to a number of key players.

Darren Fletcher is taking an extended break from the game with ulcerative colitis, Nemanja Vidic has been ruled out for the season, Anderson is battling a long-term knee problem and Javier Hernandez and Tom Cleverly are also sidelined.

The Holland international, 27, will have to accept less than his £200,000-a-week wages if he is to complete a move to the champions.

Ferguson has admitted that he would be keen to sign Sneijder, should he become available in the coming weeks.