It has been revealed that Manchester United and Real Madrid are at dead lock over talks for Sergio Ramos and David de Gea. 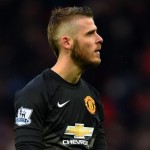 The Sunday World claims that the latest reports in Spain suggest both clubs are refusing to move in their valuations of the two players, with Real Madrid declining an invite to up their offer for goalkeeper De Gea as he has just one year left on his current United deal.

Meanwhile, United are reported to be standing firm with their €40m valuation of Ramos, with both sides waiting for the other to move in their opening offers.

It means De Gea and Ramos may well be set to take part in the pre-season tours planned by United and Real Madrid with speculation over their respective futures continuing.