It has been reported that Manchester United are set to battle Real Madrid for Juventus midfield dynamo Arturo Vidal in the summer. 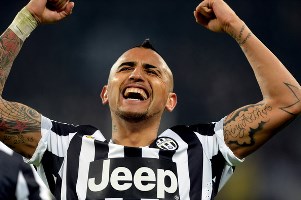 The Mirror reported that United will have to fend off the advances of nine-time European champions Real Madrid if they are to prize Vidal from Juventus this summer.

And that’s assuming either can persuade the dynamic Chilean midfielder to turn down a £200,000-a-week deal in Turin.

The 26-year-old is one of the Bianconeri’s most consistent performers and has been an integral part of Antonio Conte’s double Scudetto winners since his arrival from Bayer Leverkusen.

Nonetheless, the Chile international is at the top of David Moyes’ wishlist for potential summer targets at Old Trafford.

However, according to reports from Spain, Los Blancos boss Carlo Ancelotti has earmarked the 45-cap international as his No 1 transfer target this summer.