It has been reported that the agent of Felipe Anderson admits the Lazio midfielder is unhappy being benched against Udinese. 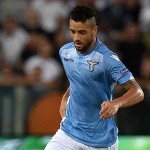 Lazio coach Stefano Pioli chose to start the 2-0 win without his Brazilian star, who is interesting Manchester United and Real Madrid.

Juliana Gomes told Lalaziosiamonoi.it: “Again he was put on the bench, I do not understand why, and he showed his mettle. Now we expect him to be regularly used as a starter, a player of the potential and ability of Felipe Anderson cannot be happy otherwise.

“He is troubled, but responds on the field with good football.”