Reports are out claiming that Juventus midfielder Paul Pogba says he’s happy with life in Turin. 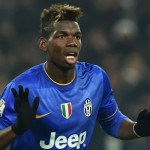 THE French international midfielder has been linked with Real Madrid and Manchester United this month.

“Turin is very calm, and it’s good for me to relax and to focus,” Pogba explained.

“I like to sit and watch TV series like The Walking Dead with [Patrice] Evra, who is my Uncle Pat. Just like in Manchester [United] there’s the French group.

“Then there’s Fernando Llorente, I see him a lot. He’s my Spanish teacher.

“Sometimes we go to eat with the team, and I love spending time with them. I think it’s a good thing which helps the squad stay united and that’s very important.

“I’m find in Turin, I think it’s a city which keeps you focus on the job of playing football.

Man Utd Not Interested In Selling Adnan Januzaj To PSG